I love you. Remember at Len’s house when I told you I loved you? I wasn’t foolin’.

But we need to talk. Not about when the next book comes out or even why we didn’t get to see Jon Snow discover how to give oral sex on the TV series (HBO OWES IT TO THE LADIES.) Mostly we need to talk about sword making. I have a sneaking suspicion that you might have gotten an idea or two about how swords are made from the movie Highlander, which isn’t entirely accurate yet a lot of geeks refer to it as if it was the Bible for sword smithing. 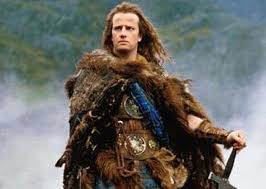 You see, a sword’s quality does not rest on the number of times it has been “folded.” I’ve noticed that every time the Game of Throne books mention a sword being made of  Valyrian steel, it’s qualified that it has been “folded thousands of times.”

Here’s the thing about steel: even the worst steel only needs to be folded a few times to purify and homogenize the metal. With a sword like the katana, the swordsmith only needs to fold the metal about 12 to 15 times. Each fold creates a double the number of layers, starting with 8 at the first fold, then 16, then 32, and so on — up to 1 million individual layers. You only need 6 folds to create over 500 layers.

Truth be told, if the steel is pure enough, it doesn’t need to be folded at all.  My Sensei’s katana was made from Chinese railroad track. It’s pure steel and it never needed to be folded, just hammered into shape.

You don’t have to take my word for it. I asked renowned sword maker Warren Sorrells:

Check out his amazing videos on YouTube. Here is my favorite:

So, ironically, Valyrian steel must be of incredibly poor quality if it needs to be “folded” so many times to get out the impurities and evenly add the carbon. But even the attractiveness that Warren mentions isn’t increased that much with “millions of folds.” That many folds would not make it much more attractive than, say, a sword folded half as many times. (I am assuming, of course, that The Seven Kingdoms are based in some kind of physical reality like our own. Women have babies, people eat, swords are forged.) I really think that you, George, meant layers, and not much more than 1 million.

Given all of this, if I were writing a fantasy world based on Earth, then what would make an amazing sword? Certainly the addition of spells would help (like The Wall has), but something as simple as a “special sauce” like the original Damascus sword would be very cool and in keeping with actual sword making.

Carbon nano tubes were discovered in Damascus steel, which is what scientists believe gave the steel its unique strength. Special forging techniques also probably contributed to the unusual patterning. I suspect there wasn’t an excess of folding.

Anyway, this blog post is not really for George RR Martin. It’s for anyone who ever wanted to know what the hell was up with all that “folding” crap that people talk about when referring to sword making. It’s also for that annoying jackass I met at a friend’s birthday dinner who demanded to know how many times my Sensei’s sword had been folded, as if that was the measure of the steel’s quality.

2 thoughts on “George R.R. Martin and the Valyrian Sword Problem”