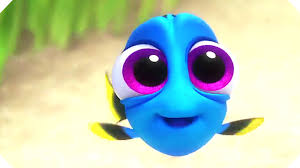 We watched Finding Dory night before last on Netflix. It was harder for me to watch than I thought it would be. Dory’s “re-mem-bory” problems have been a reality for my sister, Danielle, since her tragic car accident at the age of 17 thanks to a traumatic brain injury (TBI) that changed her life forever.

Finding Dory is about the Pacific regal blue tang in Finding Nemo trying to find her family. As I watched, I kept flashing back to times when Danielle had said something for the 500th time, or had misremembered something, even made up entire histories to compensate for missing memories. While I found Dory’s sweet disposition and guilt about her shortcomings endearing, it also stung knowing that in real life people with TBI’s or dementia do not necessarily take being corrected about things very well. In fact, some people with TBI’s can get agitated and even violent if you tell them they have a memory problem.

But I did love how the story teaches children to have compassion for people with disabilities, to incorporate them into their community, and ultimately to see the value that disabled people bring to every situation because of their unique perspective. It even showed how “abled” people can have a restricted view of the world that limits their coping strategies. That’s because people with disabilities live outside the box. Therefore, they think outside the box on a regular basis.

This was beautifully illustrated when Nemo asks his father, Marlin, “What would Dory do?” and his father lists his own narrow-minded problem-solving strategies. Nemo gets frustrated with him. “That’s what you would do. What would Dory do?” he replies, recognizing that Dory’s approach to the world, however unorthodox, is often innovative.

This sharp Verge review describes many of the film’s best points, especially around Dory learning to cope with her disability and the depression that accompanies it. But even if Finding Dory isn’t a vital addition to the Pixar canon, it’s an incredibly important addition to children’s films. While the story might lack the emotional gravitas of Finding Nemo for most folk, it packed a much harder emotional punch for those of us who have loved ones with profound disabilities. We need more movies like this that tackle disability in such a compassionate and healthy way, showing families and communities loving disabled people as much as the abled.

This subject matter is critical not just for children but for our continued growth as adults. The fact that the U.S. has elected a man to the presidency who mocks disabled people is proof enough that many grownups in America are in dire need of a soul. Since they won’t listen to fellow adults, a children’s film might be the only way of convincing them to grow one.

So, thanks, Pixar. You don’t know it, but this might be your most important film yet.