I meant to write this blog post after the Paris attacks. I only bring it up because I often find my acquaintances have a limited understanding of the problem that France and its immigrants are facing. (If you’re already aware of this, good for you. Spread the word.) When I was living there nine years ago, I did touch lightly on the subject in an article I wrote for Thomas Roche‘s now-defunct ErosZine. Given that the violence in France and other European countries is only escalating, I want to talk about what I learned living there about what’s driving Islamic radicalization.

I’m afraid it’s going to tarnish the Tour d’Eiffel a bit. So, hold on, Francophiles.

Please keep in mind that this is my point of view based on what I learned when I was living in France, as well as being in a relationship with a French educator for a few years. It’s by no means the definitive explanation for France’s woes. However, if you can appreciate insights from a person who’s had a foot in both countries, this is for you. I’m talking about this because I think we Americans can learn quite a bit from what’s happening in France to prevent future bloodshed in our own country and foster true peace.

Also? MURDER IS WRONG. I’m not in anyway apologizing for terrorists. I’m just providing some insight into what’s inspiring disaffection. Whatever it is after that that ignites homicidal shitheadedness is something else entirely.

The Surprising Problems with Egalité 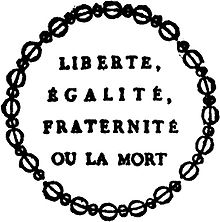 “Liberté, Egalité, Fraternité ou La Mort” — Liberty, Equality, Fraternity or Death. That’s the national motto of France. As Americans, we can dig it. While France’s revolution was inspired by ours, it’s important to understand that France’s version of “egalité” or “equality” is very different from America’s. In America, you can believe whatever you like and (theoretically) not be discriminated against in various settings for expressing your beliefs. However, in France’s version, while you can still believe whatever you want, your faith must remain entirely private. That means you can’t wear anything that reveals your religious beliefs. For egalité to work, France secularism demands that everyone look the same. I know that sounds strange to us Americans, but that’s how everyone in France can appear equal before the state. As a result, the country bans people from wearing overt religious sentiments, such as headscarves and veils — a huge problem for French Muslims, as discussed in this great LA Times article, “In France, extreme secularism.”

Before Americans get too high on their horses about this, keep in mind that America, too, at times legally curtails the practice of religion, such as the use of peyote by Native Americans, the Santerian ritualistic killing of livestock, and Mormon polygamy. At one time, Mormons were considered terrorists or at least agitators. No small amount of blood was shed over conflicts with their communities, such as in the 1838 Mormon War.

What’s not discussed in the LA Times article, nor in many articles on the subject at all, is that a lot of newer Muslim immigrants, especially second- and third-generation youth, are not learning French. When you have a country like France that values language above all else, this is a very serious problem. If you don’t know French, you’re simply not considered a citizen.

While living in France, I got to know a French high school teacher who taught in the Paris suburbs where the 2005 riots happened. She shared with me her daily challenges dealing with these youth who, due to language issues, are often at least two years behind in schooling. She said they simply didn’t care to learn French or any of France’s customs, citing religious conflicts. She often called them on their hypocrisy: they were fine with watching secular movies and listening to secular music yet they refused to learn Voltaire because he was an atheist? Yeah, right. Turn in your damned homework, kid.

Another problem this teacher faced was that, even if they had some literacy, those same students couldn’t write a simple essay supporting an argument. I explained to her that one understandably has trouble effectively analyzing or constructing arguments if one has been taught to accept a thick bolt of religious ideas without ever unwinding it — I knew this from personal experience as a former Christian Evangelical. (The French find Evangelicals to be deeply weird for lots of reasons, by the way.) It’s a skill deficit that poses yet another stumbling block to education, albeit not as initially problematic as the language barrier. But still.

French people told me that older Muslim citizens — those in their 40s and up — tended to know French and integrate more easily. I never got clarification as to why this was the case. It does, however, line up with what M. G. Oprea writes in the Federalist: “In the 1980s, second-generation North Africans tried to blend in with mainstream French culture. They wanted to get into clubs, to drink, and to dance. They just wanted to be ‘French.’ Today, things are different.” (Her article, “How France Grew Its Own Terrorists” is mostly excellent, although I’d hardly blame France for the violence. Please refer to my earlier note about homicidal shitheads.)

By far, the language issue isn’t the only thing holding back Muslim immigrants and their children. While French people might in fact be favorably disposed to Muslim immigrants, in hiring practice, they can be outright racist. An Arabic name on a job application, especially from someone in a certain age range, means the applicant probably doesn’t know the language and therefore disrespects French culture. The results are devastating to the employment prospects of French Muslim youth in particular.

Out of despair, rage and poverty, some youth turn to crime. A friend of mine in Aix, a young woman named Aurelie, told me she’d been “jumped” (assaulted and robbed) numerous times at night leaving work, always by Muslim youth. She was ready to boot out every single immigrant, but sadly never acknowledged the vicious cycle behind the crime.

If it sounds like Muslim religious requirements and France’s secularism are in solid conflict, they are. Both contribute to the growing disaffection and radicalization happening in that country. I love my country and its melting pot values, but I don’t expect France or any country to unravel its culture in order to accommodate immigrants the way we do (and the way I hope we will continue to do after the next election). I also sympathize with minority groups. They shouldn’t be either ignored or demonized just because they’re different.

How They Can Come Together

Given that France’s immigration issues and patterns are tied directly to its colonial history, with the vast majority of Muslims coming from North Africa, France has to take at least some responsibility for how they handle these particular immigrants. They can’t just dig in their cultural heels and say, “This is not French and therefore not allowed” because, hello, these folk are French. France has a terrible history of simply not dealing or indulging in outright denial. Therefore, something must change around the current version of secularism. I think France is strong enough to handle it. Hell, man, they let in evangelical Christians and Mormon missionaries whose sole purpose is to do the one thing that most French people hate: proselytize. They can figure out how to handle their citizens wearing headscarves. Further, employment discrimination needs to be dealt with in the courts and laws, not just with nice sentiments in flimsy polls (referring back to the LA Times article). And if the headscarf ban seems misogynist, it kinda is. France is pretty crap when it comes to women’s rights, which is a whole ‘nother blog post.

That said, everyone in France needs to learn French to be literate, educated, engaged citizens that can compete in the job market and fight for their rights. Some soul-searching needs to happen around what the true integration barriers are. (And kudos to the high school teachers who are calling kids on hypocrisies.) How can everyone integrate with the culture in a positive way? Sure, there are always going to be family and belief conflicts as kids grow and make their own way, regardless of country or culture. But pretending to eschew education in favor of religion when you’re really just lazy should be called out. Too many kids are following the siren’s call to extremist violence for anyone to let that shit pass.

There must be some flexibility on both sides, though, to solve the problems of integration. This isn’t about just ISIS versus the general population. Anti-semitism is also on the rise in France, with growing violence against Jews from primarily pro-ISIS and pro-Palestinian factions. (Check out the horrifying photo in that Vanity Fair article I linked to. Drawing a swastika on the Statue de la République is both about as anti-French and anti-semitic as you can get.) French Jews are leaving France in droves, which is heartbreaking and shameful to France.

Francois Hollande had a good idea when he introduced increased employment aid for low-income youth. Ironically, the more conservative Sarkozy also had a good idea that was thoroughly blasted: funding the construction of mosques so that Muslims felt more included. Neither solution is or was enough. Both France and its Muslim population need to do more for one another if the two are to embrace. Until then, the answer to the question as to whether one can be both Muslim and a French citizen remains dangerously uncertain.